High-throughput screening (HTS) is characterized by experimentation on a large or even ultra-large (> 100,000 experiments) scale, which is achieved through a high degree of automation with regards to pipetting and microtiter plate handling as well as through miniaturization of experimental procedures. Data generated in HTS are subject to variation caused by different sources and therefore requires appropriate normalization. In general, the following steps are taken:

HiTSeekR guides the user through each of these steps and enables well informed decisions based on informative plots and direct method comparisons. One decisive advantage of the HTS technology is its versatility, i.e. almost any kind of cell based assay can in theory be adapted. Since the early days of the technology, where it was mainly used for small molecule screens (drug screens) in pharmaceutical companies, this flexibility has opened up new use cases, such as RNA interference (gene silencing) or miRNA screens (inhibitors or mimics). Each of these screen types demands a different strategy for down-stream analysis. All three types of screens are supported in HiTSeekR and due to differences in the downstream analysis, the first step in a HiTSeekR analysis is always to choose a screen type as illustrated here: 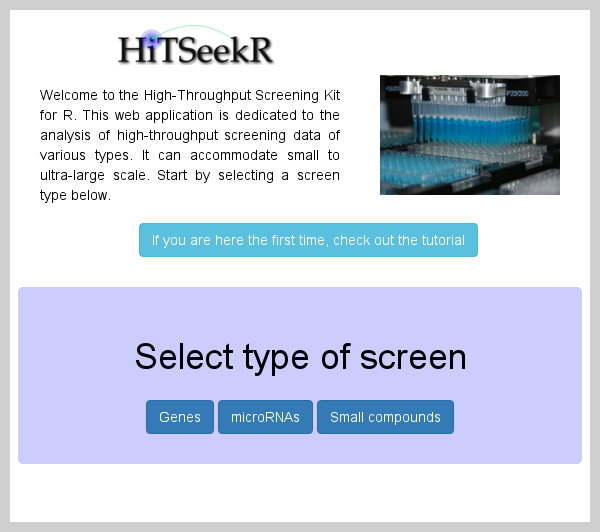 We will elaborat on all three screen types in this tutorial. However, since the first four steps are identical, they will only be shown exemplary for gene silencing. We thus recommend starting the tutorial there. To learn more about a specific screen type, select one here: